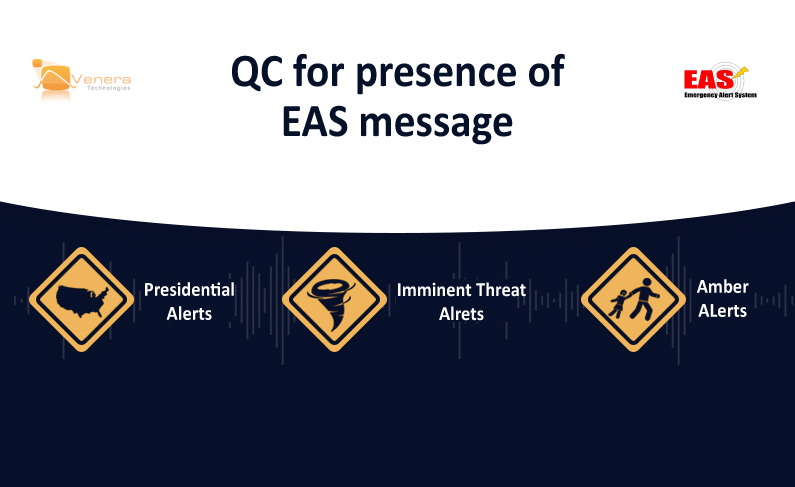 The Emergency Alert System (EAS) is a national public warning system in the United States, commonly used by state and local authorities to deliver important emergency information, such as weather and AMBER alerts, to affected communities. EAS participants include radio and television broadcasters, cable systems, satellite radio, and television providers, and wireline video providers. These participants deliver local alerts on a voluntary basis, but they are required to provide the capability for the President to address the public during a national emergency. The majority of EAS alerts originate from the National Weather Service in response to severe weather events, but an increasing number of state, local, territorial, and tribal authorities also send alerts.

EAS messages are sent as part of the media delivery channel of various participants. Key characteristics of EAS messages include:

Since the EAS messages are specifically designed for emergencies, it is prohibited to be used by participants for any other purposes, intentionally or unintentionally. Participants are not even allowed to transmit a tone that sounds similar to EAS messages. The simple rule is that no one is allowed to misuse EAS messages to attract attention to any other content such as advertisements, dramatic, entertaining, and educational programs, etc. To enforce this, FCC has imposed heavy penalties on various broadcasters for violating this rule. Some of the major pending or settled violations and their proposed or actual fines are listed here.

Many of these violations have been accidental but some of these have been because of creative intents also. One specific case is an episode of the TV show “Young Sheldon”. In the Season 1 episode titled “A Mother, A Child, and a Blue Man’s Backside,” Missy (Raegan Revord) is watching the classic “duck season/rabbit season” Looney Tunes short and is annoyed when a tornado-watch alert interrupts it. According to a source familiar with the situation, the scene used a muffled, background sound that was altered to balance the authenticity of a family’s reaction to a severe-weather event and the FCC’s rules against the misuse of the EAS tones. Nevertheless, FCC has proposed a $272,000 fine against CBS for this violation.

To avoid such penalties, broadcasters and other content providers must ensure that an audio tone similar to an EAS message is not present in the content they broadcast. Any missed instance can attract heavy penalties and would also potentially tarnish the brand image of that content provider. Therefore, every content must pass through stringent QC (validating there are no EAS tones) before getting delivered to the end-users.

The EAS message structure is based on Specific Area Message Encoding (SAME). Messages in the EAS are composed of four parts: SAME header, an attention signal, an audio announcement, and SAME end-of-message marker; as described below:

File based QC tools are now commonly used in the content preparation and delivery chains, thereby reducing the dependency on manual QC. Many content providers resort to spot QC as against a full QC, exposing them to the risk of missing potential violations of FCC guidelines. Therefore, a QC tool that can reliably detect the presence of an EAS message or a tone similar to an EAS message can potentially save a content provider from the potential losses and embarrassment.

EAS message detection is part of all of our QC offerings – Pulsar & Quasar. As a result of QC, the report will contain the exact location of such violation that users can use to review and decide.

Our QC tools not only detect the ideal EAS message tones but can also report tones that sound similar to EAS message tones. Considering the case of “Young Sheldon” episode, this becomes important and can potentially save content providers from potential penalties.

We provide a range of QC tools for various deployments, be it on-premise or on Cloud. Whatever operational mode the users use, they can ensure that EAS tones are not present in the content they send out to end users.